What Are Remy Hair Extensions?
(and other remis hair extension questions)

"What are remy hair extensions?"

What is remy hair?

In order to explain things fully, we should say that originally the term remy (which was originally (and still is) remis) is from the French word remettre meaning to put back (it's the past participle of the French verb remettre and means "re-put" or "put back").

It was used in the olden days in relation to the making of wigs with human hair and "to put back" meant to put back the hair in the same direction as it was when it was cut from the donor's head - all the cuticles facing the same direction; downwards.

Remy is about cuticles and the direction in which they point.

A bit of quick biology reveals that all human hair has cuticles that point away from the roots.

Remy hair has all cuticles intact, unaltered and running in the same direction.

So back to the question; what are remis hair extensions? 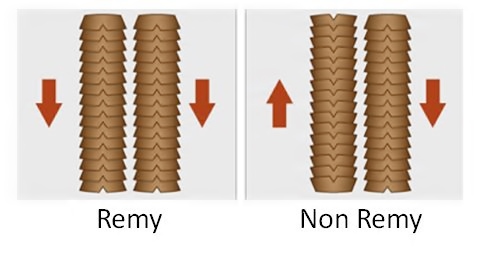 Remy hair has less of tendency to tangle than non-remy hair extensions.

This isn't to say that remy hair cannot tangle - it can and it does.

All natural growth hair would qualify as remy hair (as all the cuticles face the same direction).

Never-the-less, every hair single type of natural growth hair texture experiences tangling - including naturally straight and wavy textures (why do you think the Tangle Teezer was invented?).

Remy hair is less prone to tangling but it isn't tangle free.

"What is the hair used in non-remy human hair extensions?"

Hair extensions made from non-remy hair are usually one of two things:

A common theme mentioned in relation to non-remy hair is that it tangles and whilst this is accurate, it doesn't tell the entire story and so it may be helpful to consider that:

When you consider the above it's clear that the non-remy-tangling argument loses a bit of its edge; this isn't to say there aren't "bad batches" of hair extensions and wigs out there that will tangle unceasingly or become matted, but that it's not the case for the vast majority of non-remy hair; because if it were, then it could not be sold because it would not be bought... ever... at all.

If you'd like to keep up to date with new articles and guides about hair extensions, wigs and hairpieces, then join our blog which is super simple to do and doesn't require any personal info.
21/03/16