If you get up close and personal, you'll notice very tiny kinks in the hair strands which is why it's doesn't appear as shiny as silky straight textured hair extensions.

Yaki (Afro) Straight Clip On Hair Extensions...
Will They Blend?

The more texture (curly) your natural growth hair was before straightening, the more likely it is that it will blend with Yaki (Afro) straight (relaxed straight) clip hair extensions.

This means that straight and wavy heads may find their natural hair is glossier than Yaki (Afro) straight hair and so won’t blend as well – there’s not much that can be done about this as the ability for hair to reflect light (and therefore look shiny) is due to the overall shape of the hair strand itself.

So if you have straight or wavy growth hair then the better texture options for clip in hair extensions are silky straight or natural straight textures.

Yaki (Afro) straight clip hair extensions are available as single wefts. Wefts can be as narrow as 1 inch and these are frequently worn at the sides of the head near the temples.

Wefts can be as wide as 9 inches and these are typically used at the back of the head (ear to ear).

Yaki (Afro) straight clip in hair extensions are also available in multi width sets (multi what whoa!? Read on and all will be explained).

Sets usually have a minimum of seven wefts of varying widths and can have as many as 12 wefts per set. These multi width sets are also available in a variety of densities (weights).

Being a maven, you’ll be aware that longer lengths are on the market but you’ll have to work like a treasure hunter to find them. 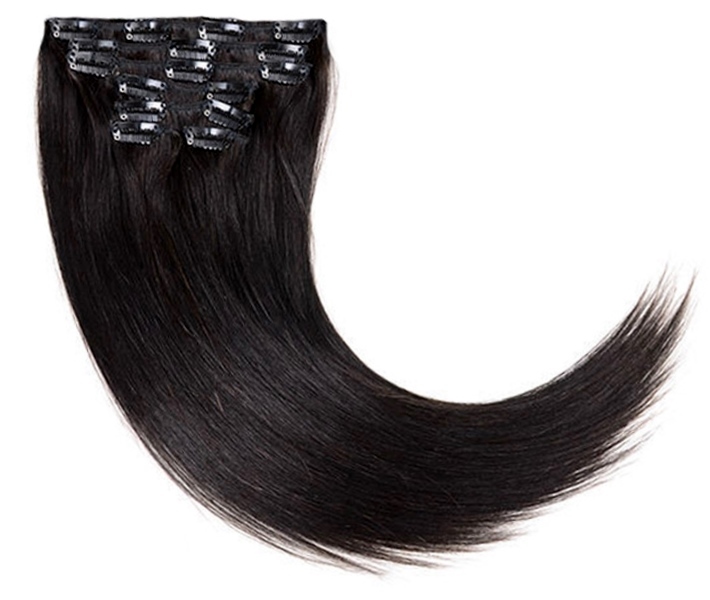 If you're unsure as to which colours would complement your skin tone, why not check out our guide to hair extension colours and skin tones.

If you haven’t already perused Peruke’s Caring For Clip In Hair Extensions Guide then go ahead but first, cast your eyes over these top five tips to get started:

1. Use a leave-in conditioner or deep condition your clip in hair extensions to repair and strengthen the hair as it has been chemically processed.

2. Wash your clip hair extensions with a shampoo designed for chemically treated hair.

3. Prevent the hair dehydrating by using a moisturizer without mineral oils.

5. Whenever you wash the hair extensions, detangle before washing and at the end of washing (before drying).